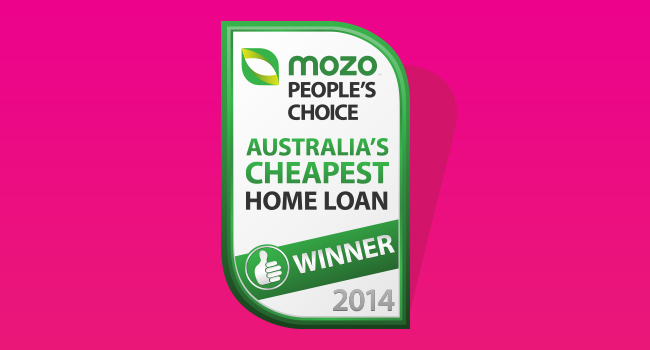 It is the second consecutive year loans.com.au has beaten the big four banks to take out the prized title of Australia’s Cheapest Home Loan, and in August marked the milestone of having the lowest variable interest rate in Australia for 12 months.

“Loans.com.au has gone from strength to strength since it opened in 2011, and not without its share of detractors who speculated customers wouldn’t want a home loan from a lender without a branch network,” he said.

“This People’s Choice Award confirms for us that we were right to rely on the online model we built to keep costs down with the mission of offering the market’s lowest interest rates.”

This year more than 200 home loan providers were ranked by their customers for the Mozo People’s Choice Awards, and loans.com.au scored 9.2 out of 10.

The Dream Home Loan has been rated Five Stars for Outstanding Value by Canstar since September 2011 and recently improved its value proposition by extending its 4.54 percent p.a rate to 90 percent LVR.

Mr Cannon said there was no secret formula for loans.com.au’s outstanding performance.

“The world over, the relationship customers want from their lender is changing and loans.com took early steps to cement its place online,” he said.

“Loans.com.au is all clicks, no bricks. Because we don’t have the overhead of a branch network to maintain we can pass on savings to our customers and offer very competitive home loans. Once again, the people have spoken and voted loans.com.au Australia’s Cheapest Home Loan.”