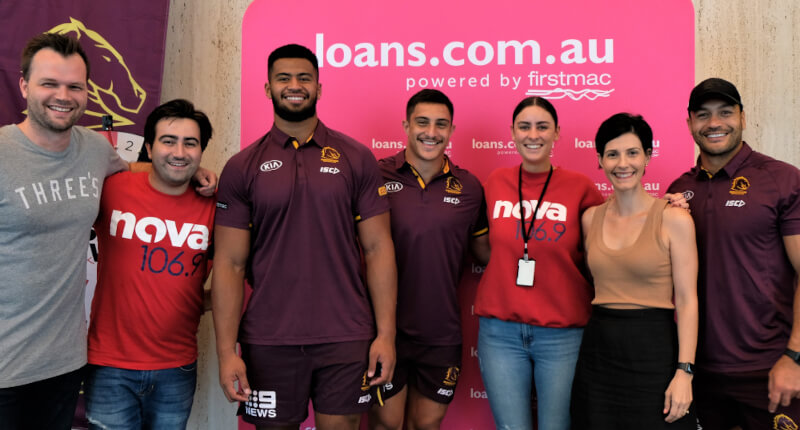 Broncos kick off the season with loans.com.au and Nova

“This event marks the seventh year that loans.com.au and our parent Firstmac have been Premier Sponsors of the Broncos and partnering Nova represents an exciting opportunity to reach our Brisbane audience further,” Ms Mortimer said.

“As a Brisbane-based employer with many loyal Brisbane borrowers, our passion for the Broncos success is in our blood, so we look forward to the kick off every year.”

“This year will be even more enjoyable than usual as we join Nova to hold activations before every game and have a lot of fun with our fellow Broncos fans.”

She said partnership with Nova was a natural development as loans.com.au was a long-standing Premier Sponsor of the Broncos and Nova was a committed Associate Partner.

Nova sports reporter Mitch (The Prince) Lewis, who attended the launch, said he was thrilled that loans.com.au was sponsoring his live sports segment over the course of the season.

“I’m a fan first and I love the association with the Broncos and loans.com.au and anything that gets football on the radio more,” Mr Lewis said.

“When Nova and loans.com.au come together in these activations I think it’s going to be a perfect storm that can only be good for the Broncos.”

Ms Mortimer said the Broncos’ strong competitive spirit and commitment to fair play mirrored loans.com.au’s own values as it strived to compete against the big banks that hold the monopoly in Australia.

Founded in 2011, loans.com.au has grown to become Australia’s largest online lender, with thousands of happy customers across Australia. Loans.com.au is backed by the financial strength of our parent company Firstmac, which is a leading non-bank lender.

Firstmac has been operating successfully for almost 40 years and it has $12 billion in mortgages under management. They were founded in Brisbane in 1979 as a small family business and have grown to a large national brand in the home and car loan space.