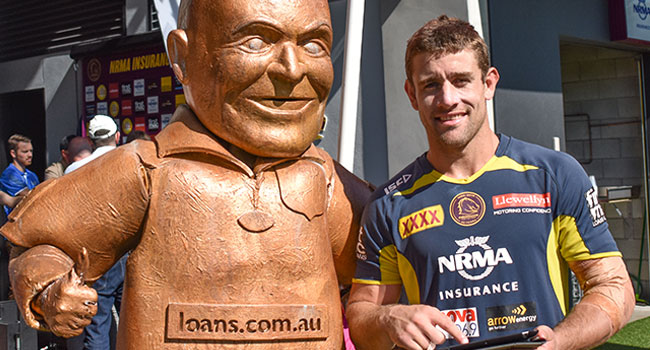 Current broncos players back alfie for next statue

Brisbane Broncos players have thrown their support behind Allan “Alfie” Langer to be the next league legend immortalised with a bronze statue outside Suncorp Stadium, following Queensland Premier Anna Palaszczuk’s call in Parliament yesterday for the public to decide between Alfie Langer, Cameron Smith and Johnathan Thurston.

Broncos hooker Andrew McCullough was the first player to sign the petition at www.alfiestatue.com.au calling for a statue of Langer to be erected and said Langer - who remains an Assistant Coach of the Broncos - had earned a statue among the greats on the Northern Plaza on the 30th anniversary of his first appearance at Lang Park.

“Allan Langer deserves a statue at Suncorp for what he’s done for rugby league in general and more so Queensland rugby league,” McCullough said.

“If you think of a Maroon jersey you think of Allan Langer and what he’s brought to rugby league not just on the field but off the field is something that will never be forgotten and I think needs to be represented well.”

“He’s such a relaxed person but he’s such a competitor and he does deserve a statue at Suncorp,” McCullough said.

Brisbane Broncos Premier Sponsor loans.com.au put the idea of a new Lang Park statue on the agenda six weeks ago when it launched the Alfie Statue campaign and is encouraging supporters to sign the petition at www.alfiestatue.com.au, which will then be presented to Ms Palaszczuk to show widespread support for Alfie among Queenslanders. The petition already has more than 2000 signatures.

Broncos centre Jordan Kahu was another current star who signed the petition backing Alfie for the next statue at Lang Park.

“He’s been such a stalwart in Broncos history and Queensland history so, obviously, he’s deserving of a statue outside Suncorp,” Kahu said.

Loans.com.au Managing Director Marie Mortimer said it was obvious that Langer deserved to be the next player to get a statue as Smith and Thurston had played far less football at Lang Park than Alfie and had not yet finished their playing careers anyway.

“If Alfie gets passed by after 30 years of amazing service to Queensland rugby league it will be a huge injustice,” Ms Mortimer said.

“We will be down at Lang Park for the next Broncos home game on Friday collecting signatures and we ask everyone who remembers Alfie’s glory days for Queensland to come up to us and sign the petition to make their feelings known.”

Ms Mortimer said that Allan “Alfie” Langer, affectionately known as the “Little General”, had a playing record for the Broncos, Queensland, and Australia that was on a par with any of the players currently immortalised with a statue on the Northern Plaza and any of the other proposed candidates.

“Alfie was one of the greatest ever players but the boy from Ipswich has gone beyond that to also become a true Queensland legend and a much-loved personality,” Ms Mortimer said.

“Alfie has been with the Broncos since their first game 30 years ago, so this is the right time to honour him. Cameron Smith and Johnathan Thurston are great players and their time will come - but they need to wait like Alfie.”

As part of the campaign for Alfie, a bronzed mascot which looks like an Alfie Langer Statue will appear on the field at home games to encourage fans to sign the petition using their smart phones. The campaign will also be supported by billboard advertising, social media assets, and a video outlining the case for an Alfie Langer statue that will also be shown at Broncos home games.