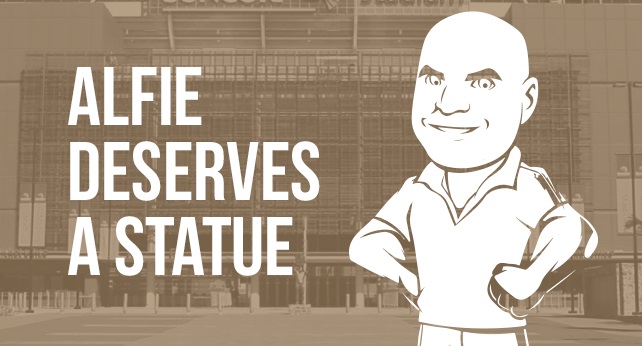 Brisbane Broncos premier sponsor loans.com.au has launched a public campaign to see legendary Queensland player Alfie Langer given the recognition he deserves with a statue on the Northern Plaza of Suncorp Stadium.

The campaign will encourage supporters to sign a petition calling for a statue, which will then be presented to Stadiums Queensland and the Queensland Government.

Loans.com.au Managing Director Marie Mortimer said she had realised that without a major campaign, Alfie would never receive the statue he had earned over three decades of service to rugby league and Queenslanders at Lang Park.

“As a long-time supporter of the Broncos we have had a lot to do with Alfie and we can’t believe that he has been forgotten at the stadium where he has given so much to all of us as Queensland rugby league fans,” Ms Mortimer said.

“There is even talk of other players being given a statue while the greatest Queensland player of his era, Alfie Langer, is ignored despite his continued support for the Broncos on the field each week.”

“Like every other little kid in Queensland, I grew up watching Alfie and was inspired by him and the way he always produced something when the game was on the line.”

“Alfie is a really humble guy who would never ask for a statue so it is up to us to take up the cause to ensure he doesn’t miss out on his rightful place among the greats at Suncorp Stadium.”

Ms Mortimer said she believed there was wide public support for an Alfie statue, and she was confident of success.

The #AlfieStatue campaign follows in a tradition of Queensland rugby league players being given statues after public campaigns with corporate support.

Wally Lewis was the first to be immortalised in bronze in 1991, followed by Darryn Lockyer in 2012, after a campaign by the Sunday Mail.

A statue of Arthur Beetson was unveiled in 2012, with Mal Meninga following in 2013, both with public and corporate backing.

Ms Mortimer said that Allan “Alfie” Langer, affectionately known as the “Little General”, had a playing record for the Broncos, Queensland, and Australia that was on a par with any of the players currently immortalised with a statue on the Northern Plaza.

“Alfie was one of the greatest ever players but the boy from Ipswich has gone beyond that to also become a true Queensland legend and a much-loved personality,” Ms Mortimer said.

“Alfie has been with the Broncos since their first game 30 years ago, so this is the right time to honour him.”

As part of the campaign, a bronzed mascot which looks like an Alfie Langer Statue will appear on the field at home games to encourage fans to sign the petition using their smart phones. The campaign will also be supported by billboard advertising, social media assets, and a video outlining the case for an Alfie Langer statue that will also be shown at Broncos home games.

For all media and analyst enquiries, please contact Duncan Macfarlane, Public Relations and Communications Manager for loans.com.au, on 0434 184 264 or: