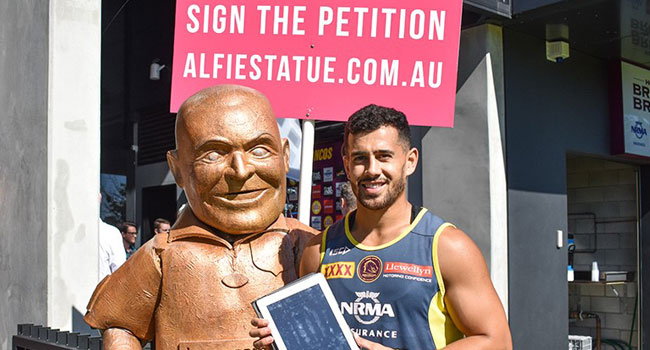 Broncos Premier sponsor loans.com.au has called on Queenslanders to loudly back Allan “Alfie” Langer in response to Premier Annastacia Palaszczuk’s request in Parliament for them to choose whose statue should go up next outside Suncorp Stadium.

Managing Director Marie Mortimer said the statue had been put on the public agenda by loans.com.au with its Alfie Statue campaign and it was only fair that he should receive the next statue outside Lang Park.

“Johnathan Thurston and Cameron Smith are both great players but they are both still playing so they should wait their turn behind Alfie before they are even considered for a statue,” Ms Mortimer said.

“Also - let’s face it. Only Alfie is really associated with Lang Park, after captaining four premierships for the Brisbane Broncos who are based at Lang Park.”

“Lang Park is Alfie territory and he is still out there every week pounding the field with the Broncos as an Assistant Coach.”

“Cameron Smith should get a statue at AAMI stadium in Melbourne instead, and Johnathan Thurston outside the beautiful new North Queensland Stadium in Townsville where he played most of his games..”

Ms Mortimer said it was now more urgent than ever for Alfie Langer supporters to sign the petition at www.alfiestatue.com.au and vote in online media polls supporting Alfie to show the Premier the public had chosen Alfie as the next statue.

“Premier Palaszczuk has asked Queenslanders to choose so let’s all get out there and make sure that Alfie doesn’t get bypassed after 30 years of service to Queensland rugby league,” Ms Mortimer said.

More than 2000 people have already signed the Alfie Statue petition, which calls for a statue of Alfie to be erected among the greats on the Northern Plaza at Lang Park.

“To get this many signatures so quickly is phenomenal and shows that there is a lot of support out there to ensure that Alfie is not forgotten at his home stadium of Lang Park,” Ms Mortimer said.

As part of the campaign, a bronzed mascot which looks like a huge Alfie Langer Statue has been appearing on the field at home games to remind fans to sign the petition.

“Alfie has been with the Broncos since their first game 30 years ago, so this is the right time to honour him,” Ms Mortimer said.