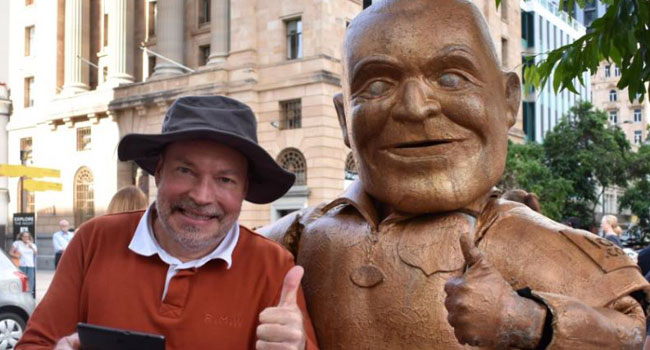 Queenslanders have once again shown their support for the Alfie Statue campaign, flocking to the Alfie Statue mascot during a short signing event at Queen Street Mall and emphasising his positive influence beyond the rugby field.

The people approaching the loans.com.au team to sign the Alfie Statue petition came from all walks of life but they had in common their admiration for Allan “Alfie” Langer and his service to Queensland rugby league and the broader community.

“Of course he deserves a statue because he’s a good player,” Annerley grandmother Victoria Carter said.

“I watched him years ago but I also met him when he took the team down to Wacol Prison where I worked. He’s done the sport but he’s done the social stuff too.”

“He was a pretty good player but I think he was also a good role model generally,” Mr Ditchfield said.

“Guys like him encourage young people to get outside and play healthy sports instead of wasting their time on video games and drugs.”

More than 20 people signed the petition at the short lunch time mascot appearance, bringing the number of signatories to almost 3000 people.

Last week, rugby league legend Wally “The King” Lewis added his name to the petition, which will be presented to Queensland Premier Annastacia Palaszczuk following her call for the public to tell her who should receive the next statue outside Lang Park.

Broncos Premier Sponsor loans.com.au started the Alfie Statue campaign in late April after fears that Alfie - who remains an Assistant Coach at the Broncos - would be bypassed in favour of more recent players such as Cameron Smith and Johnathan Thurston, despite his immense achievements for Queensland rugby league.

Managing Director Marie Mortimer said it was touching to hear how Queenslanders supported an Alfie statue for reasons other than his sporting exploits.

“We all know that Alfie has a playing record that is second to none but it is fascinating that most people talked about his influence off the field when they were asked why Alfie deserved a statue,” Ms Mortimer said.

“To earn a statue, we expect players to be good people too, and it is clear that Alfie gets a tick from the community at large for his efforts over the last 30 years.”

Ms Mortimer appealed for Alfie Langer supporters to sign the petition at www.alfiestatue.com.au.