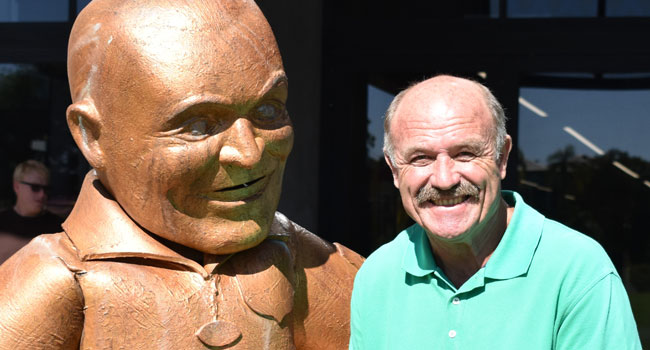 The King calls for Alfie statue at Lang Park

Queensland rugby league icon Wally “The King” Lewis, has backed Allan Langer to be the next league legend immortalised with a statue outside Suncorp Stadium, following Premier Anna Palaszczuk’s call in Parliament for the public to decide.

While signing the Alfie Statue petition, Lewis – who was the first ever player to be cast in bronze outside Lang Park - said that Langer should also be honoured with a statue.

“He’s been a crowd favourite whether that be for the Broncos, Queensland or Australia,” Lewis said.

“When he first came into the representative sides there was a little bit of doubt about whether he’d make it in the big boys’ league but from the first performance he just indicated what a wonderful player he is.”

“Alfie was a great club man for the Broncos - he was basically the backbone of this place through their premiership campaign,” Lewis said.

“He deserves a statue. He’s been one of the great performers at Suncorp Stadium over the years.”

Lewis made the comment while signing the petition at www.alfiestatue.com.au.

Ms Palaszczuk called in Parliament this week for Queenslanders to choose who should be the next rugby league legend to receive a statue at Lang Park – Melbourne-based Cameron Smith, Townsville-based Johnathan Thurston or Brisbane-based Allan Langer.

Brisbane Broncos premier sponsor loans.com.au had earlier put a new Lang Park statue on the public agenda by launching the Alfie Statue campaign and is encouraging supporters to sign the petition, which will be presented to Ms Palaszczuk. The petition already has more than 2000 signatures.

Loans.com.au Managing Director Marie Mortimer said the comments by “The King” - which follow support for Langer from current Brisbane players Andrew McCullough and Jordan Kahu - showed that the Queensland rugby league community was behind Alfie.

“Alfie has been with the Brisbane Broncos since their first game 30 years ago, as well as playing 37 games for Queensland, so he is the local favourite,” Ms Mortimer said.

“No-one can claim to have given more to Queensland rugby league fans at Lang Park than Alfie Langer and it’s time for us to give him the statue he deserves.”

Ms Mortimer’s comments came as Broncos prop Tevita Pangai Jr joined the chorus of current and future players calling for a statue of Alfie to be erected at Lang Park.

“He absolutely deserves a statue. He’s won four premierships and he just defeats the saying that little guys don’t have a place in rugby league,” Pangai Jr said.

“Everyone who thinks they’re too small to play rugby league, when there’s a statue of him, go look how small it is, and be inspired.”

As part of the campaign for Alfie, a bronzed mascot which looks like an Alfie Langer Statue will appear on the field at home games to encourage fans to sign the petition using their smart phones. The campaign will also be supported by billboard advertising, social media assets, and a video outlining the case for an Alfie Langer statue that will also be shown at Broncos home games.